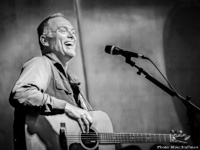 In the past 10 years, Larry Murante has won more than 18 awards in US and international competitions for songwriting and performance, including Grand Prize Winner of the John Lennon Songwriting Contest. Other awards include the West Coast Songwriters Song Contest and the Great American Song Contest (see full list). His fourth CD release, Patch of Sky, has garnered critical acclaim and radio airplay in both the US and Europe.

“Larry’s a great talent! His insightful, original songs are perfectly complemented by his pure tenor voice, skilled guitar, and harmonica playing. He adds funny and thoughtful on-stage banter and stories, lacing his music together for a relaxed and pleasing night of music. Go see him!” —Craig Lund, Seattle Folklore Society

Larry is an all-around entertainer, with stories, songs and stage presence, not to mention beautiful lyrics and great talent. Our audience was captivated from the first song, and the feedback we received was extremely positive. We can’t recommend Larry and his music enough. —Russ & Julie’s House Concerts, Oak Park, CA

His songwriting is spectacular. I’m so glad I’m beyond the age of jealousy…When I hear people like Larry Murante sing I feel like that’s why they were put on this earth. We need to hear these voices. —Christine Lavin, singer-songwriter/humorist

When Larry hit those delicious high notes, the hair on the back of my neck rose. —Lorraine Hart, Tacoma News Tribune